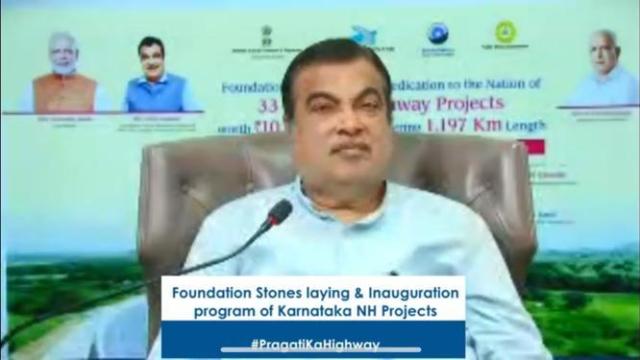 The Minister added that for providing smooth connectivity to the ports for the benefit of trade and economy, 4-laning of the entire coastal road from Goa Border to Kerala Border connecting port city of Belekeri, Karwar and Mangalore covering a length of 278 km have been taken up at a cost of Rs 3443 crore and the work has been substantially completed. Further, in view of the safety of road users, 3 works for improving the safety by providing protective measures on Hill slopes in Shiradi Ghat on NH-75, Charmadi Ghat on NH-73 and Sampaje Ghat on NH-275 have been sanctioned amounting to Rs.115 crore.

Gadkari further informed that the Union Government shall invest approximately an amount of Rs 1,16,144 crore in Karnataka in the coming years. He said, 11 road projects of 275 kms worth Rs 5083 crore have been awarded in the State during the financial years 2019-21.

Gadkari called upon the State to take up production of Ethanol in a big way, as it is one of the largest producer of sugarcane in the country. He said, the country is already over-producing sugar and rice, and sufficient stock are available with the government. The surplus may be converted to Ethanol, which can be used as an alternative fuel for vehicles. He said, this will not only improve farmers' income, but will also be an indigenous source of fuels for the country.

Former Prime Minister H D Devegowda praised the steps taken by the government in developing the Road network in the State. He said, New technology has entirely changed the developmental scenario. He said, what we see today, is unbelievable.

Chief Minister Yediyurappa assured to take forward all the suggestions given by the Union Minister. He said, his government is committed to development of the State, and uplifting of the life style of its people. He said, he is working in co-operation with the Centre to achieve his government's targets.

Union Minister Sadanand Gowda enumerated the list of development works taken up by the Centre in Karnataka during last 6 years. He praised Gadkari for planning the coastal road network from Goa to Thiruvanantpuram. Union Minister Prahlad Joshi also appreciated the development efforts in NH sector, and said, road connectivity is now a basic necessity like food, clothing and shelter.

Mallikarjun Kharge, MP and former leader of Congress party in LS, too praised the co-operative nature of Nitin Gadkari, calling him pro-development. He requested the Union Minister to release CRF amounts to all projects in the State equally.

MoS-RTH Gen Dr V K Singh said, the projects being inaugurated will provide better connectivity between major cities in Karnataka region. Inter state connectivity will be faster and hassle free. These will have transformational impact on agriculture, fisheries and health sectors. He said, theses project aim to improve economic corridors, costal and remote areas with rapid growth and safe movement of passengers and cargo. Further, the development of NH 66 will give a boost to economic relation of the State and link to provide connectivity to ports.