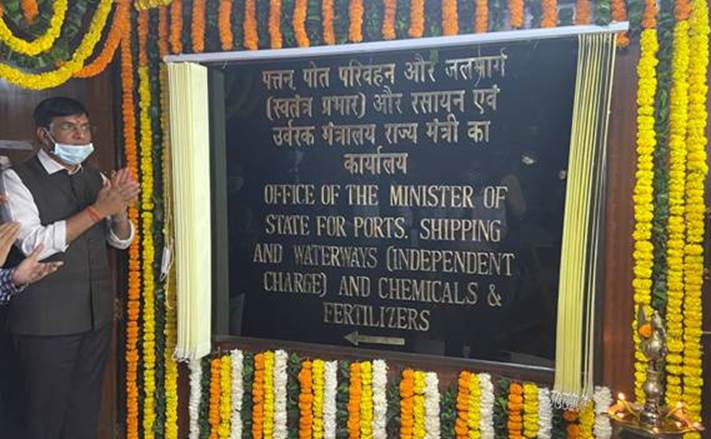 Prime Minister Narendra Modi announced the renaming of Ministry of Shipping while addressing, through video-conferencing, the inaugural ceremony of Ro-Pax ferry service between Hazira and Ghogha in Gujarat.

As soon as the Prime Minister announced the name change, the Ministry swung into action to complete all the related formalities. All the formalities were completed within two working days and the official notification of the name change was published in the Gazette of India.

During the formal unveiling of plaque ceremony, Mansukh Mandaviya stated that it is indeed a matter of pride that with Prime Minister Narendra Modi’s vision, the country is moving ahead with a holistic and long-term approach of multi-modal connectivity. He added that he is indeed grateful to Prime Minister for his foresight regarding the expansion of the scope of work as far as ports, shipping and waterways are concerned.

Mansukh Mandaviya stated that “With the changed name, the Ministry is going to put extra focus on the development of Waterways and coastal shipping. Around 1400 km of waterways have already been fully developed and additional 1000 km is being developed on priority for which DPR/feasibility study has been completed. We are also focussing for creation of a Port Grid, encompassing various smaller ports like fisheries port, agriculture port and mineral port, etc so that port development and port-led development takes place in the country.”