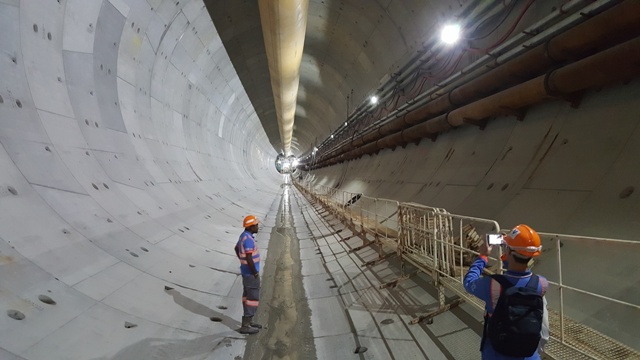 Speeding Hong Kong transportation by going beneath the ocean

To improve road transportation in Hong Kong, the local government decided to build the Tuen Mun-Chek Lap Kok Link (TMCLKL). This roadway connects the Northwest New Territories, Hong Kong Boundary Crossing Facilities (BCF), Hong Kong – Zhuhai – Macao Bridge, Hong Kong International Airport, and North Lantau. The TMCLKL’s design had to work around the existing roads, coastline, and 55-kilometer Hong Kong – Zhuhai – Macao Bridge, which includes cable-stayed bridges, four human-made islands, and a subsea tunnel. As a result, the TMCLKL had to incorporate a dual two-lane subsea tunnel, with a record-breaking depth of 55 meters below the surface, a length of 4.1 kilometers, and a total development cost of USD 6.1 billion.

Geotechnical design and analysis of the dual tunnels at the southern landfall of the BCF reclamation, undertaken by Golder Associates Hong Kong, would require one of the world’s largest tunnel boring machines, with a drill of 17.6 meters in diameter, as well as two smaller tunnel boring machines that use drills of 14 meters in diameter. A much smaller tunnel boring machine, with a drill of 3.6 meters in diameter, would bore a total of 57 cross passages. The alignment of the tunnels at the southern landfall would take Golder Associates underneath seawalls supported by stone columns, under a ventilation building, into connections to ventilation shafts, and around complex geological conditions. Additionally, water pressure would be high, as the distance from the ground level to the top of the tunnel ranged from 28 meters to 42 meters. These situations presented numerous geotechnical challenges that the project team had to overcome.

The ground conditions at the southern landfall comprise of fill underlain by soft marine deposits, alluvium, completely decomposed granite, and rock. The tunnel horizon is in the alluvial clay and sand layers.Since the southern landfall reclamation was recently constructed during 2013 to 2015, Golder Associates had to consider any residual consolidation and creep settlement in the clay layers while working on the geotechnical and structural design of the segmental tunnel linings, which run below the southern landfall. One of the design criteria was a residual settlement of less than 500 millimeters over a design life of 120 years.

Another reason why Golder Associates knew that traditional geotechnical methods would be insufficient was the tunneling that they would need to complete on this project. When tunneling at the southern landfall new reclamation site, the pressure of the slurry had to be maintained at a high enough amount to ensure tunnel face stability and achieve a design volume loss ratio of less than 2%. The actual measured volume loss ratios due to tunneling were generally less than 1%. Barrettes had been installed at the tunnel springlines at an optimized length and spacing along the tunnel alignment, keeping tunnel ovalization at less than 1% of the tunnel diameter during its service life.

After considering the project complexity and scope, Golder Associates adopted Bentley applications to design this challenging tunneling project. They used PLAXIS 2D and PLAXIS 3D as the main applications due to their versatility and proven records in modeling soil-structure interaction problems. The Soft Soil Creep model was used to predict creep settlement in the clay layers, where input parameters were calibrated by site-dedicated, high-quality field and laboratory soil tests. For other soils, the Hardening Soil Small model was used to model the degradation of soil stiffness from a very small strain and to predict more realistic ground movement from unloading during the tunnel excavation. These advanced soil constitutive models - combined with modeling of tunnel excavation in 2D and 3D –produced a design that met the required TBM face slurry pressure to maintain stability. The design will also ensure that Golder Associates can control ground movement and optimize the barrettes supporting the tunnels in terms of size, spacing, and length. The team was also able to design the break-in and break-out of the main TBM into and out of shafts and adjoining cut-and-cover tunnels, and well as the break-in and break-out of the mini TBM to construct cross passages between the two main tunnels.

In interpreting and managing the information on complex ground conditions at the southern landfall reclamation, Golder Associates used gINT and HoleBASE to process hundreds of boreholes, field tests, and laboratory tests. This practice produced geological models in 2D and 3D, geological sections, and contour plans, which were relied on for the geotechnical design.They also used MicroStation to produce engineering drawings for construction.

By carrying out sensitivity and parametric analyses in PLAXIS 3D, Golder Associates managed to reduce the number of barrettes required to control the tunnel ovalization from 158 to 106, with 46 of them shortened from 19.2 meters to 16.4 meters. This optimization saved approximately two months of construction time, reduced carbon dioxide emissions by 1,500 tons, and saved USD 16 million. The team was able to make high-quality, comprehensive instrumentation monitoring data available before, during, and after the tunnel construction. The measured ground settlements, lateral movements, pore water pressures, and tunnel lining deformations were generally in line with and/or less than the predictions.

By using digital analysis and modeling with Bentley applications, Golder Associates was able to help open the TMCLKL road project to traffic on December 27, 2020. The new tunnel shortens travel distance between the Northwest New Territories and Hong Kong International Airport by 22 kilometers, shortening travel time from 30 minutes to 10 minutes.