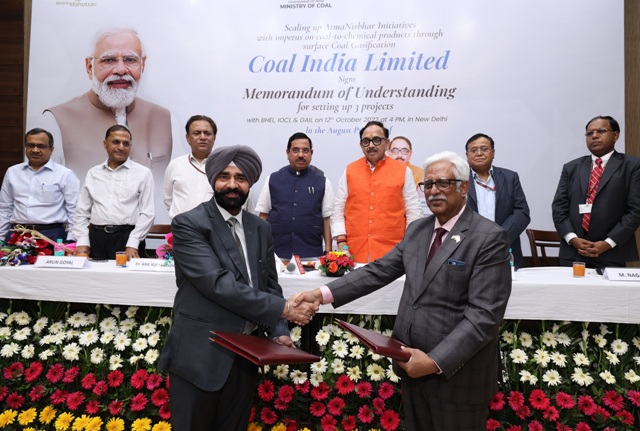 Bharat Heavy Electricals (BHEL) has entered into strategic MoUs with Coal India (CIL) and NLC India (NLCIL) for setting up Coal Gasification based plants. Under these MoUs, BHEL will jointly set up a Coal to Ammonium Nitrate Project with CIL based on gasification of high ash Indian coal, and a lignite-based gasification pilot plant with NLCIL for power generation, utilising BHEL’s indigenously-developed Pressurised Fluidised Bed Gasification (PFBG) technology. Significantly, this will be a breakthrough step towards meeting the National Coal Gasification Mission target of 100 Million MT.

BHEL is a pioneer in the development of indigenous coal gasification technology, ie, PFBG, and has successfully gasified high-ash Indian coals. This technology was earlier utilised to establish a 6.2 MWe IGCC-based Combined Cycle Plant at BHEL Trichy.

Notably 75% of Indian coal has high ash content and technologies developed abroad are not capable of handling such coal. BHEL’s PFBG technology is most suited for this type of coal. The company has already successfully set up India’s first high-ash Indian coal to Methanol (0.25 TPD) pilot plant at its Corp. R&D, Hyderabad, which was dedicated to the nation by the Hon’ble Minister of Heavy Industries in January, 2022. A dedicated team within BHEL is now working in mission mode to commercialize this technology as well as execution of EPC projects for providing end-to-end solutions for businesses based on Coal Gasification.

BHEL’s coal gasification technology will not only help in gainful utilisation of India’s large coal reserves in a sustainable manner and indigenous production of high-end chemicals, but can also boost Power Generation through Integrated Gasification Combined Cycle (IGCC) technology and this provide impetus for self-reliance in this crucial area, in line with the Hon’ble Prime Minister’s vision of ‘Aatmanirbhar Bharat’.