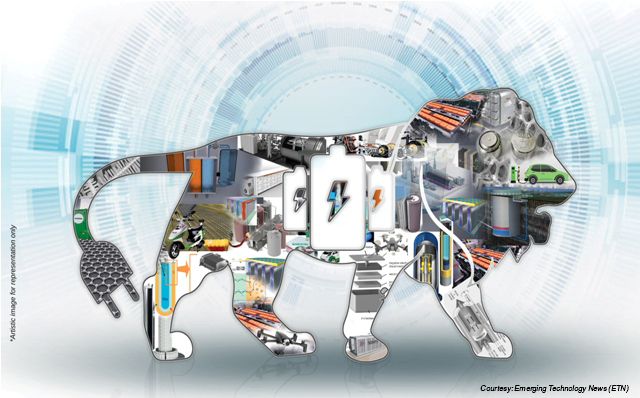 Indian Cabinet has recently approved the much-awaited proposal of Department of Heavy Industry (DHI) for implementation of the Production Linked Incentive (PLI) Scheme 'National Programme on Advanced Chemistry Cell (ACC) Battery Storage’. The PLI scheme on ACC Battery Storage proposed by the DHI is aimed at achieving a manufacturing capacity of 50GWh of ACC and 5 GWh of "Niche" ACC in Indiawith an outlay of Rs.18,100 crore.Direct investment of around Rs.45,000 crore in ACC Battery storage manufacturing projectsis expected from this scheme.

To recap, last year in November ‘2020, GoI approved PLI scheme for 10 key sectors, one of them being ACC Battery Manufacturing and declared Niti Aayog as the implementing agency for the scheme, along with DHI. Niti Aayog’s subsequent release of Model Bid Documents for ACC Manufacturing Program in November 2020 for industry consultation and feedback, further strengthen the seriousness of the government in making advanced cell battery storage as the 'Champion Sector’.

ACC batteries will be crucial for India's energy security in the coming decade given their role in enabling renewable integration and e-mobility transition. Currently, all the demand for ACCs in the country is being met purely through imports and at present India imports INR 20,000 crore worth of battery storage equipment.Most of the demand for the storage today isfrom renewable integration, power backup, diesel minimization, electric vehicles -- not just on roads but drones, electric planes, marine applications-- and consumer electronics devices such as cell phones etc.It is expected that the dominantbattery technologies will control some of the world's largest growth sectors. India is currently aiming towards reaching its climate goals especially through renewable targets and reducing vehicular pollution by pushing electric mobility under the Faster Adoption and Manufacturing of (Hybrid and) Electric Vehicles Phase II.

Despite all the firm efforts, India’s oil and gas import dependence during FY’20 still accounted for meeting 77.1% of the domestic needs against actual target of reducing by 10% to 67% (based on import dependence of 77% in 2014-15) by 2022. As the nation rapidly progress towards clean targets, if not immediately concentrated towards indigenous manufacturing, India may end up being cell dependent country, like oil dependent in transport sector.

To meet its climate commitments and to achieve energy security, the Government of India has set a target of installing of 175 GW of renewable energy capacity by the year 2022. Recently, these aspirations have been increased to 450MW by 2030.  As on April 30, 2021, has achieved cumulative Renewable Energy Capacity of 95.01 MW and further projects of 49.7GW and 25.91 GW capacity are under various stages of bidding.  India Energy Storage Alliance (IESA) has estimated the stationary energy storage marketpotential in India to be around 250 GWh during the period 2020-2027. CEA projects requirement of 500 GWh (136 GW) of storage in the grid at various levels by 2030.

Considering the aspects of RE penetration and need for energy security, India’s path to self -reliance through AatmaNirbar Bharat can be best realized by fostering innovation and R&D in the renewables space. Thus, it is important to bring down dependence on imports of solar panels, battery modules, and other components in a significant and relevant manner. Hence it is need of the hour to encourage local manufacturing and invest in cutting edge technologies and innovation. Only way to achieve this kind of potential in India is to create an ecosystem for investments supported by strong regulatory framework.

Although several companies in India investing in battery packs, still the investments are too small in comparison with the market demand in India and almost negligible investment inmanufacturing, along with value addition, of ACCs in India. With the newly approved PLI scheme in ACC battery manufacturing, India is believed to make advanced battery storage technologies domestically and reduce its reliance on imports.

Net savings of Rs. 2,00,000 crores to Rs.2,50,000 crore on account of oil import bill reductionduring the period of this Programme due to EV adoption as ACCs manufactured under the Programmeis expected to accelerate EV adoptionand contribute in reduce India's Green House Gas (GHG) emissions which will be in line withIndia's commitment to combat climate change.

As per government PIB release and model RFP document released by Niti Aayog in Nov’2020, ACC battery Storage manufacturers will be selected through a transparent competitive bidding process.  The manufacturing facilitywould have to be commissioned within a period of two years. The incentive will be disbursed thereafter over aperiod of five years.

Since the program is mainly aimed at advanced chemistry cell battery manufacturing, it is limited to electrochemical storage technologies but within that, the program allows all forms of electrochemical technologies that meet the criteria to be eligible for the manufacturing incentive. The program starts with technologies that have at least 50 watt-hours per kg as energy density and goes up to technologies that have 350 watt-hours per kg or more -- which are the latest generation technologies. The second parameter considered is cycle life.  The incentive amount will increase with increased specific energy density & cycles and increased localvalue addition. Each selected ACC battery Storage manufacturer would have to commit to set-up an ACCmanufacturing facility of minimum five (5) GWh capacity and ensure a minimum 60% domestic valueaddition at the Project level within five years.

Furthermore, the beneficiary firms must achieve a domesticvalue addition of atleast 25% and incur the mandatory investment Rs.225 crore /GWh within 2 Years (at theMother Unit Level) and raise it to 60% domestic value addition within 5 Years, either at Mother Unit, in-caseof an Integrated Unit, or at the Project Level, in-case of "Hub & Spoke" structure.

Department of Heavy Industries shall be acting as the implementing agency, and it will be responsible for monitoring the implementation of scheme and timely disbursement of the funds. The entire process is defined, including the testing criteria and all the other parameters.

India has already reserves forseveral minerals required such as iron, copper, aluminum, phosphorous, nickel, manganese, cobalt. Depending on the battery chemistries India has reserves for many of these materials, the global supply chain has also developed. For example, abundant reserves available in Australia, or countries in Latin America have a very well-developed mining sector and they are currently looking to partner with Indian companies.The Indian government has already set up a separate PSU, KhanijBidesh India Ltd. (KABIL) specifically for the purpose of securing critical raw materials needed for Indian industries. KABIL has already signed MoU and partnership agreements with some of the international mining companies.

In the last two years, initial deposits of Lithium have been found -- one in Karnataka and another in the Eastern part of India – whether they are economical to be mined is something that must be decided but these things will develop. With the ACC program mandating 60 percent domestic value addition, there is a big opportunity to get raw materials from outside but same can be processedto the purity and quality required for battery grade then there is tremendous value addition available there.

Another important aspect is, in Li-ion battery the materials do not get destroyed during the use of it, unlike fossil fuels. In the case of Li-ion battery, all the mined and processed materials can be almost 100% recycled if not then 90% recycled and reused within battery manufacturing as well as many other applications such as medical-grade pharmaceuticals or lubricants. Around the world, billions of dollars are being invested in the recycling of advanced chemistry cells and this problem will be solved. Hence, for the next 5-6 years although freshly mined material but later the share of recycled material as a part of the new battery manufacturing supply chain will start going up.

In past 6 months, 24 Giga factories for Li-ion battery cells were announced with a total production capacity of over 600 GWh in these countries. China is expected to double its capacity from ~350 GWh in 2020 to more than 800 GWh by 2025. Europe is about to ramp up capacity and anticipates annual production capacity of over 500 GWh by 2025. Similarly, US government under the leadership from President Biden, has also launched Energy Storage Grand Challenge and is expecting to attract over 300 GWh of advanced energy storage investments in next 5 years. To catch up with the pace of these countries and attract significant investments from Global players to invest in India, it is very vital at this time for Indiato set long term visionary for next 15 -20 years towards this sector; just not limit to current planning & targets.