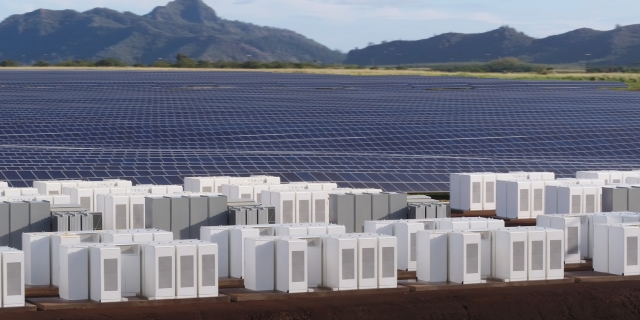 The global uptake of renewable has resulted in a parallel requirement for storage solutions. Since solar and wind are intermittent, the energy production through these sources also sees a great deal of variability. And in the absence of storage solutions, the power ends up being wasted, leading to underutilization of a green energy source as well as loss of revenue to the power producer. Curtailment losses arise when the producer is unable to send power to the grid because of grid congestion and some renewable projects even see curtailment rates of up to 50% . It is thus important that there exist storage solutions to store energy during periods of high production, to be used during periods of peak demand.
Utility-scale energy solutions are one such solution to the problem. These are storage solutions that range from a few megawatt-hours (MWh) to hundreds of MWh. Their integration with the grid allows for a variety of functions apart from the crucial work of helping integrate renewable energy. Many grid ancillary services such as frequency response, voltage support, spin reserve, and a variety of other functions can also be performed by these storage solutions. And for a decentralized power grid, a decentralized storage network is needed to provide the support that it needs.
However, utility-scale energy storage also faces numerous challenges in its development. These include economic reasons, operational challenges, supply chain issues, and the nature of technological evolution itself. Uncertainties on each of these fronts are of concern to developers of storage solutions and might also impact the rollout of renewable.
Economic viability
The prime solution that utility-scale storage provides is in the form of storing excess energy during periods of high renewable power production. This stored energy can then be supplied later during periods of high demand. However, since this period of peak production only lasts for about 4-5 hours in a day , the storage system ends up being idle for the rest of the period. This massive underutilization of the asset ends up impacting its business proposition, and thus results in long payback periods, typically a few years at the minimum and usually much longer. Only when storage solutions are called upon to provide grid ancillary services, as is the case in some electricity markets, does the value proposition of these projects increase as they now receive an additional revenue stream. The utilization level of the battery thus plays a large role in its viability.
Though the price of Lithium-ion, which is the preferred chemistry for storage at the moment, has declined from more than $1100 per kWh in 2010 to about $135 in 2020 , low utilization would still mean that the economics might not always work out.
Executional and operational challenges
Utility-scale storage also faces obstacles in execution. For projects of a large nature, the number of stakeholders involved tends to be more, with players across different jurisdictions coming into play as well. It might be the case that not all the players have the same approach or goal in mind, and the project thus ends up being delayed because of multi-stakeholder dependencies. And with policy requirements constantly changing, projects might not see closure at all.
Large-scale storage systems also make sense with centralized production. With the growing decentralization of the power grid, centralized storage systems would need this power to be moved over large distances and back, thus impacting the financial viability of the power produced. With India’s transmission & distribution (T&D) losses ranging more than 20% as of 2019, it is thus crucial that a decentralized power grid sees decentralized storage solutions.
Supply chain concerns
Battery Energy Storage Systems (BESS) only account for about 1-5% of the overall market of Lithium-ion batteries, with EVs making up the major share. The demand for the product, as well as the price benchmark, is thus set by the EV industry on account of the size of the market share that it commands. During times of supply chain disruptions, as has been the case over the past few years due to Covid, the energy storage industry suffers from shortages. This is exacerbated by long-term contracts that the EV industry has for the supply of Lithium, thus leading to shortages for short-term contracts.
The increasing demand from the EV industry to cater to their rising sales also means that the supply available for storage solutions is reduced. Thus, on both pricing as well as the availability of Lithium, the EV industry takes precedence. While moving to other chemistries might decouple the energy storage industry from the EV industry, that scenario is well in the future.
The rapid changes in the energy industry also mean that upcoming energy storage projects might get disrupted by emerging technologies. This makes for uncertain decision-making when it comes to deciding on investments for the medium to long term. A project with a long payback period facing off against better technology might result in the project not being financially viable over its lifetime.
Thus, while energy storage solutions are essential for a variety of reasons, building them on a utility-scale sees several challenges arising. Any such project should thus be carefully evaluated before going ahead. But seeing that the demand for storage is only set to rise, it is important that other means of energy storage, such as utilizing battery capacity in EVs, are looked at to provide solutions that the energy industry desperately needs.
Total Views: 187 admin Jun 23, 2022